Hurricanes are cyclonic storms of the western, northern Atlantic. They belong to a family of storms called tropical cyclones. Tropical cyclones rotate around a low-pressure center, produce heavy rain, and they have winds of at least 72mph. Hurricane is the name given to the storms that form in the Atlantic or eastern North Pacific. Similar storms that form in the western North Pacific are called typhoons. 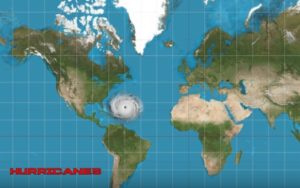 How does a hurricane Form? They form over the ocean, in places that have warm water. They grab the warm water energy and pull it into the atmosphere. Is this not how clouds are formed as well? What makes it a hurricane?

You can also learn more about Hurricane Vs Tornadoes

Picture a hurricane like it is a bucket. It needs to stand straight up. If the wind blows stronger high in the atmosphere, the bucket will topple over. When a thunderstorm forms, it’s a result of a lot of vapor that accumulates in the air. This causes the cloud to be heavy, and then it rains.

How hurricanes form differs from how thunderstorms form. So, how does a hurricane form? They need warm water, winds that blow vertically straight inside a hypothetical bucket, and a lot of vapor in the air. The ingredients of a hurricane usually come together off the coast of Africa.

When the sea surface temperature is greater than 26.5 degree celsius or 80 degrees Fahrenheit, water vapor condenses and releases heat. The heat rises and creates an inward movement of air and it spirals toward the middle of the disturbance. This is how a thunderstorm begins, creates a tropical depression and then a tropical storm.

When over one thunderstorm come together and move across the Atlantic Ocean where the water is warmer, adding more energy and vapor, a hurricane is formed. This becomes even more likely when the wind is favorable.

The only thing that can stop a hurricane in its track when it’s over water is a strong wind in the upper atmosphere. The reason why there have been hurricane formations lately is that the end of the summer brings favorable conditions.

Can we predict hurricanes? Not really. The only thing you can predict accurately is the path, not the intensity. The intensity of a hurricane is unpredictable. Once they are cut off from warm water, they weaken rapidly.

Global climate models, which studies how the atmosphere behaves over hundreds of miles, aren’t able to show much about hurricanes. However, as technology improves, so will our ability to represent hurricanes accurately with models. Now that you understand how hurricanes form, it is wise to learn about hurricane categories.